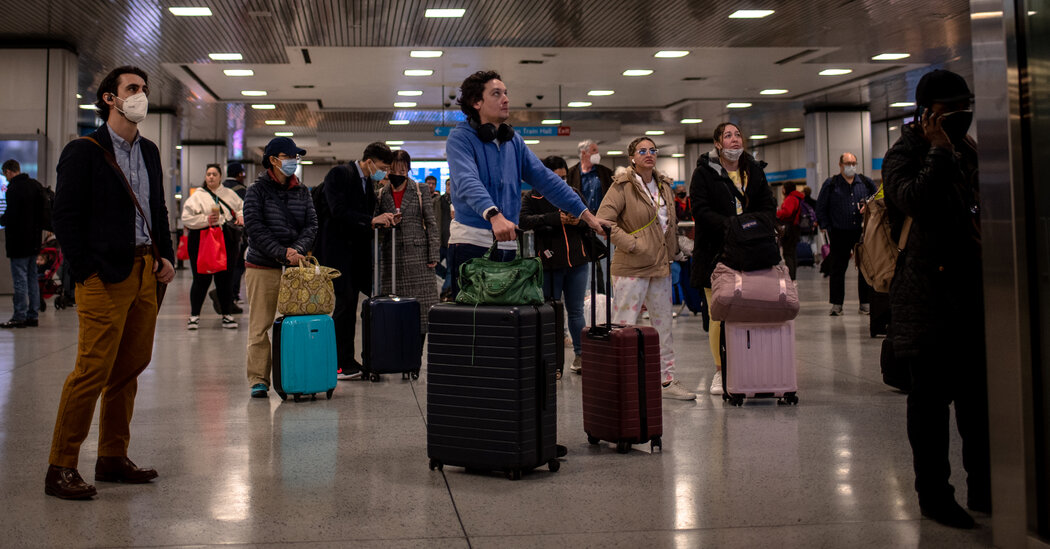 In the wake of a judge’s ruling on Monday that struck down a federal mandate, it is now up to each individual to decide whether to wear a mask on most commercial flights in the United States.

Some people were glad to say good riddance to an inconvenience that they thought did little good and was no longer necessary. But quite a few said in interviews on Tuesday that they would stick with masks for now, even though they no longer had to.

Candice Bailey, 51, was one of the holdouts. “Just to protect myself and to protect others, I continue to wear a mask,” Ms. Bailey said Tuesday morning at the airport in New Orleans as she waited to board a flight home to Greensboro, N.C. She said it was much too soon to know whether it was safe to set masks aside, especially “with the new variants that keep popping up.”

With most travelers at the airport exposing their faces, Rachel Gordon, a 29-year-old science writer from Cambridge, Mass., acknowledged that she was bucking the trend. “I tend to be an outlier, because I do favor more conservative masking rules than my peers,” she said.

Ms. Gordon said that she did so out of empathy for vulnerable people. When side effects from her second dose of vaccine “completely immobilized” her for a time, she said, “that gave me insight into what it might be like to get Covid without it.”

Count Lois Strickland, 52, a track and field coach from Smithsburg, Md., among those who were glad to see the mandate go.

“I’m tired of it, OK?” she said as she waited to board a flight to Washington. “I’ve already had Covid. I’ve already been vaccinated. I’m over it.”

She noted that masks were no longer being required at many concerts and sporting events: “You don’t have to wear them there, why do we need them on public transportation?”

The end of the mandate was a welcome relief for Carlos Perales, 31, a Chicago man who flew home from Florida on Tuesday with his wife, Yuliana, and two young daughters, aged 3 and 4.

“It’s hard to travel with young kids and make them keep it on,” Mr. Perales said.

And Abi Miller of South Bend, Ind., expressed hope that dropping the mandate would reduce the number of angry confrontations and fights on airplanes, which grew more common during the pandemic. “I figured I wouldn’t have to have my phone ready to record an incident,” she said.

Samuel Oluwafemi said he found out about the end of the mandate when he landed at Salt Lake City Monday night on the first leg of his trip home to Atlanta from Honolulu. He skipped the mask for the second leg, but then put it on again as the plane neared the airport because he thought it might still be required on the ground and in the Uber car he would take home (it wasn’t).

“Honestly, even now that I know, I’ll probably still wear a mask in the Uber, just to be safe,” he said. “I’m just used to it now.”

Peter Shankman, 49, saw more value in mask-wearing than just Covid safety. He travels frequently for his job as a corporate keynote speaker, and he said that since he began wearing a mask on flights, he has been getting sick far less frequently.

“I might continue it,” he said, adding, “It’s a little piece of fabric; it’s not that inconvenient.”

For some travelers, the issue was complicated. Geoff Grubb, 44, a customer review specialist, wasn’t wearing a mask during a layover in New Orleans Tuesday, but he said he never minded wearing one.

He said his 82-year-old father did mind, and had enough trouble breathing with a mask on that he avoided places that required them.

Mr. Grubb said he wore a mask as he went through security at the Austin airport, but took it off at the gate where people were more spread out. If someone had asked him to, he said, he would have put it back on without complaint.

“I don’t see anything in the Constitution that we have a right not to wear a mask,” he said.