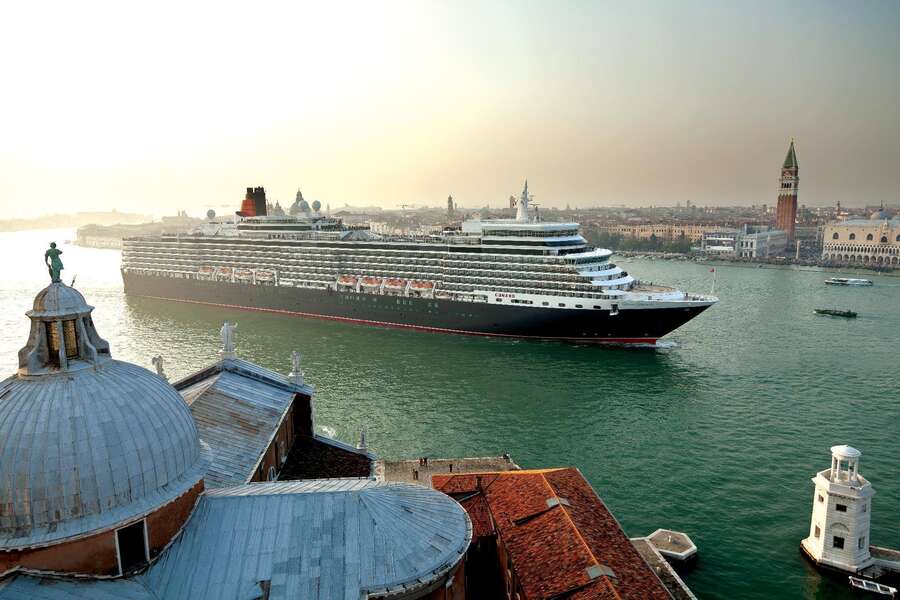 After almost four days at sea, as I sat across from two Norwegian 20-somethings on the leather sofa in the cigar room wearing a frumpy sweater and pushing my glasses up my nose, I realized I had forgotten how to talk to people my own age.

I didn’t have exact numbers for the average age of passengers aboard Cunard’s Queen Mary II, but here, 65-year-olds represented the wild youth. The most popular activities were bridge and square dancing. I heard others speak casually about living through World War II at the dinner table. There was a lot of pudding.

But somehow, I met this Norwegian couple—we’ll call them Emilie and Lukas—who happened to be in their early 20s. Like me, Emilie didn’t fly. She used to, but her aviophobia made it impossible to continue. “I would be thousands of feet in the air and just couldn’t stop thinking ‘Why? Why am I doing this?” Emilie said. Also like me, Emilie didn’t want that to keep her from traveling across oceans. So she and Lukas took off work for five months, traveled to several European countries by train, took the Queen Mary II to America, and then took a combination of Amtrak and Flixbus to Orlando, Miami, Washington DC, and New York.

That “Why?” Emilie asked herself while suspended mid-air is what a lot of young travelers are increasingly asking themselves. Even people who aren’t scared of flying are expressing that they’re fed up with the whole process, concerned about fossil fuel emissions, and simply curious about a different way to see the world.

As a lifestyle, abstaining from flying is strange, lonely, and expensive. For every pro you can count, there’s a glaring con. Between America’s lack of high-speed rail, the irregularity and price of cruise ships, and confusion as to how exactly to board a freighter, fear alone isn’t enough to keep today’s non-fliers committed to traveling without planes. Instead, they’ve had to find purpose beyond fear, a deeper meaning. Emilie told me that because she doesn’t fly, she gets to see more of the places she visits. “I don’t think I would have ever gotten to see those parts of America or talked to the people I did if I was just flying in and out,” she said.

The History of the McRib

Whenever I tell people that I don’t fly, they usually look at me with a mix of curiosity and pity, imagining that I never get to go anywhere or see anything. And while it’s true that I can’t just hop on a flight and be in Tulum by brunch, I have crossed the Atlantic and seen so many stretches of land in the American West that I would have otherwise never gotten the chance to see. I once had a random two-day layover in Chicago that resulted in my eventual decision to move there. I’ve talked to so many different people on trains—those recently released from prison, the Amish—and it’s all broadened my perspective.

But this broadening wouldn’t be possible without time—which I have a lot of, as a freelance travel writer. Emilie and Lukas were able to take off so much time from work because they run their own businesses. Amid the 2008 recession, Steve Griffin and his partner, both 28, were on a break from work when they decided to book a variety of trains and repositioning cruises to travel from San Diego to Istanbul. “I believe we were the youngest people on the cruise by about 30 years,” Griffin says. “I read a lot, ate some great food, and watched for flying fish. We stopped at Tenerife and Corsica—most people don’t stop there when flying to Europe since they’re out of the way. All in all, a great time.”

Unless you’re willing to really rough it, however, not flying can be prohibitively expensive. A roundtrip transatlantic cruise on Cunard can cost up to $30,000 for a Queen’s Grille Suite. If you’re able to book a steerage cabin (what they refer to as “Britannia Inside”) for $4,000, that’s considered a steal. Amtrak’s coach ticket prices are reasonable, but right now a sleeper—the only comfortable way to travel long distances by rail in America—is going to set you back between $1,000 and $1,700, at least. And with lengthy stops and unreliable schedules, you’re going to have to shell out money for hotels during layovers or even plan to spend a month on an entirely different continent while you wait for a repositioning cruise. Even if the prices drop, the ability to take enough time off work to do all this isn’t something everyone can manage. “For a lot of people, it’s either you fly or you stay at home,” Emilie says.

Another traveler I spoke to, Gianluca Grimaldi, is able to stick to his anti-flying climate principles because he’s an academic researcher who can work remotely whenever he has to board a boat or train. “I traveled a total of 20,000 miles from Germany to Tokyo for the [T20 Summit at the G20 Conference],” he tells me, noting that he was also able to squeeze in two research trips studying Indigenous groups in Russia and Papua New Guinea—he was forced to fly there from Tokyo, as there were no cargo ships available—along the way. Despite avoiding air travel the majority of the time, Grimaldi has been able to see so much of the world, including Singapore, China, and Iran, all by ferry, bus, boat, train, or, interestingly enough, cargo ship.

On a freighter ship, you don’t have cruise-style frills like butlers, buffets, or feather duvets. There are maybe five passengers and thirty crew members on board, a far cry from the average 3,000 guests you’d encounter on a commercial liner. Yet it’s precisely the bare-bones nature of it—and the intimacy—that Grimaldi says makes it traveling this way an unforgettable experience. “It’s breathtaking,” he marvels. “You see no other ship or land for days.”

While you’ll always need time, Grimaldi’s strategy proves that not flying doesn’t have to bankrupt you. He uses Slow Travel Experience, a German website that helps travelers find freighter ships and other alternative sailing expeditions, including mail ship travel to remote locations in the South Pacific. And for overnight stays, he opts to couch-surf, which is much less expensive than posting up in a pricey hotel. He says the couchsurfing communities in Iran and Russia were particularly active and welcoming. “I couchsurfed in Moscow, Tomsk (Siberia), Ulan Ude (East Baikal), and Vladivostok—the woman I stayed with in Ulan Ude was blind and incredibly kind,” he explains. “I couchsurfed in Iran in the past, in Mashhad and Yazd. [The people I stayed with] showed me around Tehran, Tabriz, and Isfahan. It’s really a fantastic experience.”

For me, as a Black woman, couchsurfing in Russia and Iran—or even hitching a ride on a cargo ship—is not necessarily something I’d feel comfortable doing. And it’s not a matter of creature comforts or concerns about international relations. When I was taking Amtrak trains across the US, how my no-flying lifestyle related to my race didn’t occupy my mind much. And when it came time to travel internationally, I didn’t think I’d have to worry much about a luxury cruise. But after making the transatlantic crossing from New York to Southampton, England on Cunard—a luxury, British cruise line with a long history—it came to the forefront of my mind.

During the trip, I experienced some of the most blatant racism of my life. A man asked if I was a performer from the Caribbean, a woman tried to touch my hair in the elevator, and an employee at the Southampton Cruise Port told me to get out the First Class queue and line up with the ship’s staff. When I expressed confusion about her direction, she looked me up and down and said impatiently, “I’m assuming you’re staff, right?” The entire experience reinforced that I need to keep my guard up when I’m traveling, especially when spending several days at a time committed to a slower mode of transport.

Racism is one of those things that does hold people back from traveling without flying, particularly internationally. Just ask Lavanya Sunkara, a travel writer who recently embarked on a modern luxury cruise with her husband. “I was sitting in a corner of a lounge minding my own business and getting work done on my laptop, and this woman came up asking if I was working [for the cruise],” she recalls. “I wonder if a white woman was sitting here, would they have asked the same question? It sucks being a Brown or Black person on a luxury cruise.”

When I broached the topic of me making a land crossing from India to Pakistan with some Pakistani friends, they were concerned that border officials would be even more suspicious of me because I was a Black woman. It left me staring down the fact that in order to visit my partner’s family in Islamabad, I’ll most likely have to shelve my plane-free ways.

But until the situation absolutely demands it, I’m content to not fly. What began as me trying to avoid my fear has now become a way of life I can’t imagine living without. It’s helped me grow in so many ways—made me more organized, empathetic, adventurous, and calm. As Grimalda says, “The experience of travel is not about the destination or the end point, it’s about the journey. There’s a lot that can be learned just by looking out your window.”

Nylah Burton is a contributor for Thrillist.