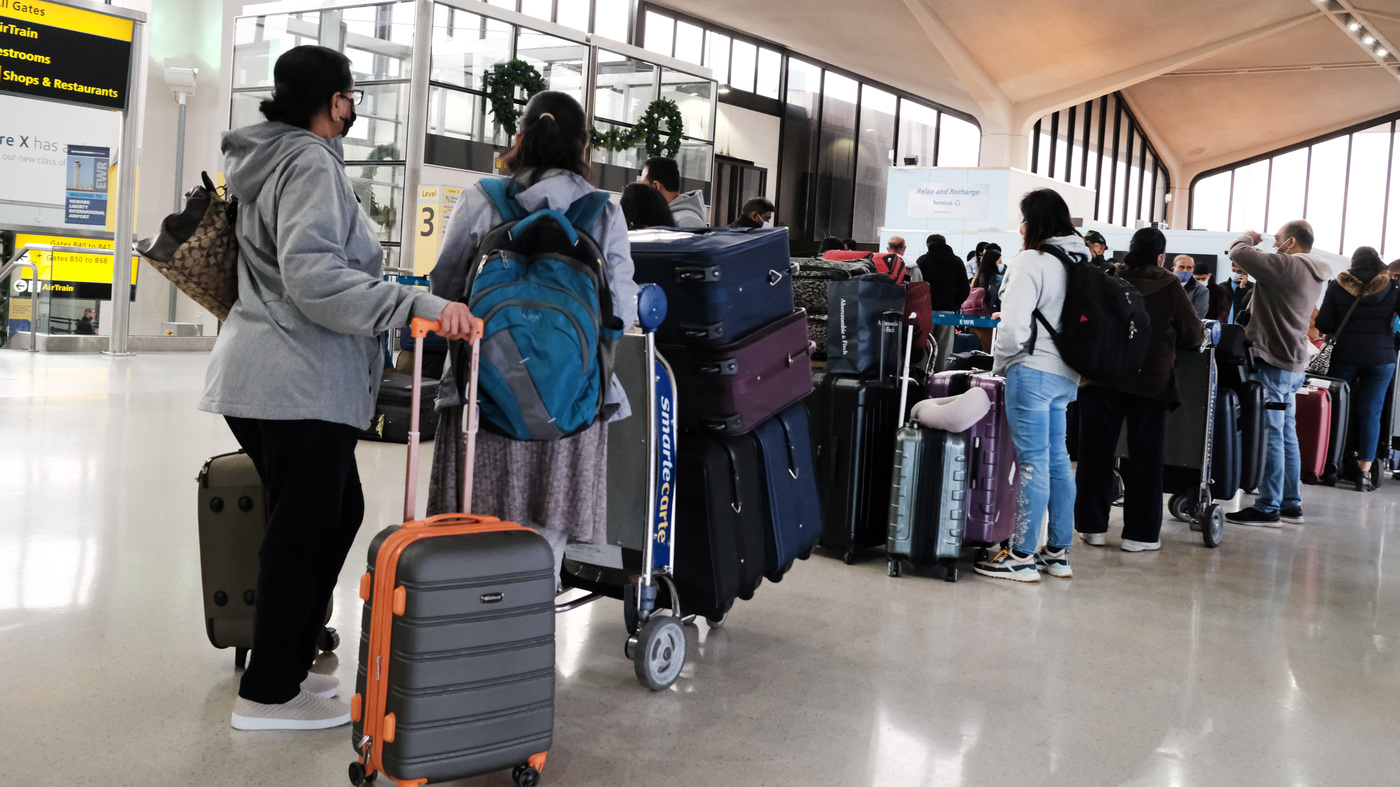 Pam and Barry Van Dyck have been dreaming of leaving behind the snow in Grand Rapids, Mich., and going someplace warm and adventurous for their 50th wedding anniversary, “with zip-lining, snorkeling, rivers in caves, amphibious vehicles and waterslides,” Pam Van Dyck says.

Of course, those aren’t activities just for them, but for their children and grandchildren too, as the retired couple wants to celebrate a half-century together with their entire family.

“Everybody enjoys being together, and this would be a fun way to celebrate us having 51 years together,” Pam Van Dyck says.

It’s 51 years now, because the Van Dycks initially planned the anniversary trip to Mexico for last December but postponed it amid a surge in COVID-19 cases at a time when vaccines were not yet widely available. Now, they’re not entirely sure they can take the rescheduled trip this month.

“Our biggest concern, of course, is what’s happening now with the new variant, and it’s just getting a little risky. I not ready [yet] to cancel or postpone,” Pam Van Dyck says, adding that she’s waiting and watching to see what happens with the new coronavirus strain. “I really don’t want to do that, but we would. I’m not putting everybody at risk.”

The discovery of the omicron variant of the coronavirus in at least a third of U.S. states is raising questions about whether it will be safe to travel for the upcoming holidays, with Christmas now less than three weeks away.

To try to curb the spread of the variant, many countries are imposing travel restrictions and bans, including the U.S, which has banned most non-U.S. citizens who have recently been in any of eight southern African countries from entering the United States.

Starting Monday, the Biden administration is requiring all travelers coming into the U.S. to provide proof of a negative coronavirus test taken within a day of their departure, regardless of citizenship and vaccination status. And it is extending the mask-wearing mandate on board planes and inside airports into mid-March.

Such restrictions are raising concerns that there may be another slowdown in air travel, hurting an industry that was just beginning to turn the corner toward recovery after having its busiest week since the pandemic began over the Thanksgiving holiday period.

U.S. airlines flew about 2.4 million passengers on Nov. 28. That’s the most since February 2020. And the industry had been preparing for a busy December too, with some airlines offering employees incentive pay to work extra or not call in sick, to accommodate the increase in passengers.

Should you travel? Health experts say it depends

Experts in infectious disease and public health officials note that omicron is a variant of concern but add that there is not much known about it, including its transmissibility, its ability to evade the immune system and the severity of disease it causes. So it’s difficult to say right now if those with travel plans for Christmas should instead stay home.

Dr. Robert Murphy, a professor of infectious diseases at Northwestern University’s Feinberg School of Medicine and director of the school’s Institute for Global Health, says, “We’ll know more in a couple of weeks, [but] I think people should really get ready to hit the pause button” on their travel plans.

He also recommends that people cancel or postpone their trip if they were planning to go overseas.

United Airlines planes sit at gates at Newark Liberty International Airport in New Jersey on Nov. 30. The United States, as well as a growing list of other countries, has restricted flights because of the detection of the omicron variant of the coronavirus.

United Airlines planes sit at gates at Newark Liberty International Airport in New Jersey on Nov. 30. The United States, as well as a growing list of other countries, has restricted flights because of the detection of the omicron variant of the coronavirus.

“The international traveler is at much higher risk than domestic,” Murphy says, and not just for contracting the coronavirus. He says with governments worldwide closing borders and imposing new travel restrictions, there’s a significant risk of your flight being canceled and you getting stranded overseas, or you being forced to quarantine upon arrival at your destination because of an outbreak. Murphy says he has canceled his own planned trip to Europe over the holidays.

As for domestic travel for those without underlying health conditions whose flights are already booked, Murphy and other public health experts urge travelers to take a wait-and-see approach.

“We’ll know a lot more in the next two weeks,” Murphy told NPR. “If this comes out like we think it’s going to come — in other words, it’s just more contagious and it’s not a worse disease — and if you’re vaccinated and boosted, that if you do get infected, you don’t get too sick, you know, I think travel could be pretty safe very soon.”

Omicron’s impact on airlines: “One more headache you didn’t need”

The rise of the omicron variant and subsequent global travel restrictions come at a perilous time for the airlines, which had been banking on a strong holiday season and a recovery in business and international travel next year to help propel the industry out of a long pandemic slump.

“Well, you know, it’s one more headache you didn’t need and you hope to avoid,” says Robert W. Mann, a former airline executive who now works as a consultant for the industry.

“It’s a continuation of the thing we’ve seen since the beginning, which was, you know, two steps forward, one step back or sometimes two steps back,” Mann says. “But, you know, we’ll make it through this. We understand how to deal with it a lot better than we did initially.”

United Airlines CEO Scott Kirby says he expects United to take a financial hit from the omicron coronavirus variant, adding that trans-Atlantic flights will be most affected.

“My guess is we’ll have less flying to Europe than we would have in January” because of the new variant, Kirby told the Financial Times.

In an interview with CNBC, Kirby added that “omicron is certainly going to have a near-term impact on bookings. … There will be a short-term dip in revenue, but the dip will be smaller than it was for delta.”

“We’ve always known there were going to be more variants, and we’ve said the COVID recovery would never be a straight line,” Kirby said, adding, “We’re much better dealing with this as a society. Vaccines are likely to prove effective again. … We look confident about the long term. Nothing changes about where we’ll be 12 months from now.”

Industry analysts agree that the airlines appear better prepared to handle the now-inevitable ups and downs that come with surges in coronavirus infections and the discovery of new variants.

“In the past year, each new variant has brought a decline in bookings, but then an increase once the surge dissipates,” said Helane Becker, an analyst with financial services firm Cowen, in an interview with The Associated Press.

The omicron variant does not appear to be biting into Americans’ appetite to travel, as domestic air travel bookings rose over the past week, according to Adobe Digital Insights, which tracks flight-booking data.

Airline and travel-related stocks rose Monday, as bookings have not fallen as sharply as expected.

Adobe’s data shows that from Nov. 25 through Dec. 1, domestic flight bookings online were up 19% compared with the week prior. Cyber Monday saw the biggest uptick in bookings, with levels elevated through the two days following. The majority of these bookings were for trips happening in the next two months.

Mann, the airline consultant, says holiday travelers who had already booked flights don’t appear to be canceling their trips yet out of fears of possibly another surge in coronavirus infections, but he says the omicron variant does cast a pall of uncertainty over how airline executives plan for next year.

“And their decision has to be, you know, how much capacity am I going to risk scheduling in 2022 for the spring and summer, mostly,” Mann says. “Because that’s when everyone hoped we would be out of the soup and into the black again. I think there’s still some concern that this may once again delay that recovery process.”

Citing the World Health Organization’s advisory warning that “blanket travel bans will not prevent the international spread” of the coronavirus, “and they place a heavy burden on lives and livelihoods,” the airline and travel industries are urging governments worldwide to reverse the most severe travel restrictions that have already been put into place.

“The emergence of the Omicron variant panicked many governments into once again restricting or entirely removing the freedom to travel,” said Willie Walsh, director general of the International Air Transport Association, in a statement. He noted that the presence of the new variant is already confirmed on all continents.

“The ill-advised travel bans are as ineffective as closing the barn door after the horse has bolted,” Walsh added.