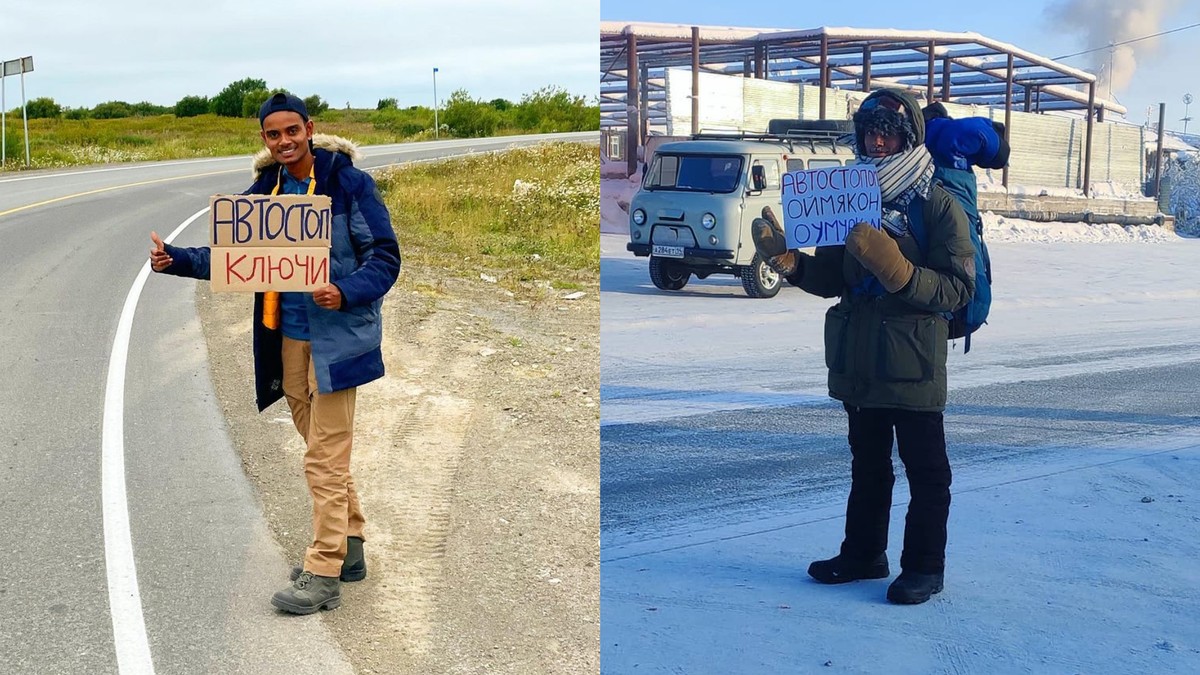 For most of us, travel is an escape from the confines of reality, a way to max out on the weekends while we spend most of our weekdays dodging that insufferable boss.

But for 20-year-old Shubham Yadav, known more popularly by his online moniker Nomad Shubham, travel is the only reality that exists.

Describing himself as an “extreme traveller,” Yadav wanders the world on a shoestring budget, simply by favouring feet over flights. Often called the “King of Hitchhiking,” he is a voyager with 1.69 million subscribers on YouTube, and who has travelled more than 55,000 kilometers around the world only by hitchhiking, a form of travel that relies on getting free rides from other travellers on the road.

Armed with a backpack, four pairs of clothes, filming equipment and a tent, Yadav has now made it to more than 40 countries around the world in less than four years, doing everything from exploring an underground black money market to visiting the former home of Osama Bin Laden to powering through a desert for several days.

“I chose the name Nomad Shubham because I started my YouTube channel in Mongolia in 2019, right after I met a tribe of nomads in a desert,” Yadav told VICE. “I was living as a nomad in the desert with no network and no knowledge of the local language. After three days of walking, I ran out of water. Luckily, I found this tribe and spoke to them using only hand actions.”

Yadav’s YouTube channel is much like him: simple, spontaneous and brimming with stories. He sidesteps the otherwise aesthetic overload formats that travel vloggers generally favour, keeping his content raw and rustic. He also usually speaks Hindi in his videos, which he believes could have contributed to the channel’s mass success.

But his story isn’t just beguiling because he started traversing the world at such a young age. It’s also one of those rare instances of South Asian representation in hitchhiking, a space that generally tends to be stereotypically overpopulated by white men, making him a role model for many who dream of seeing the world even when they can’t quite afford its luxuries.

Yadav’s modus operandi is simple: He figures out what visas or travel documents he would need to go to a certain country, and leaves literally everything else up to chance.

“I have spent days on the side of the road waiting for someone to give me a lift,” he said. “Once in Kazakhstan, I got a lift from a man who I realised later was actually the mayor of the city. He even took me to their local parliament building. Other times, I’ve had to sleep at roadside gas stations, fire stations or even police stations. I never make a plan. I just go with the flow, and if I’m lucky, someone will even take me along to their house. I’ve also been invited to my hosts’ weddings. Once, I was even invited to a funeral.”

Sometimes, he also relies on Couchsurfing – a website that connects you with locals offering their couches or beds to travellers at no cost –  or volunteers at hostels in exchange for lodging. His average daily travel budget remains Rs 500 ($6), an amount he pays for by tutoring online classes and monetising his YouTube channel.

From swimming in icy sub-zero Siberian waters to couch surfing in Cambodia to spending a day huddled in a coal-carrying Russian truck, Nomad Shubham’s journey is one loaded with enthralling adventures that never seem to end.

But when he was a teenager, even this world wanderer wouldn’t have envisioned his life to go the way it did.

Back in 2017, Yadav, then a 16-year-old student from a small village in the Indian state of Bihar, was on a different journey, one many Indians are pushed to embark upon. Yadav was among the thousands of students who sign up for coaching classes in the north Indian city of Kota, a high-intensity billion-buck industry that preps you to get entry into the most prestigious colleges in India, which often lead to six-figure salaries. The son of a school teacher, he started out with simple ambitions: study hard, work hard, and use whatever money he could save to see the world.

But everything changed when he chanced upon a YouTube video titled “How to travel the world with almost no money” during a study break. This video, an inspirational TEDx talk delivered by a travel vlogger named Tomislav Perko, stressed how far one could go simply by hitchhiking. “I had never travelled anywhere until that point, but wanted to,” Yadav told VICE over the phone, recalling the exact moment his life flipped upside down. “I didn’t even know what hitchhiking was or how far it could take me. But I wanted to try it.”

Soon after, he made his first hitchhiking expedition within the state of Rajasthan, getting a lift from Kota to Jaisalmer, a city more than 673 kilometres away famed for its regal history, sand dunes and traditional arts.

“I had never felt such a rush in my life before,” he said. “After my first trip, I knew I couldn’t stop.”

And that’s exactly what he did.

Last year, the self-proclaimed nomad set out to see just how far he could push the boundaries of land travel.

“I wanted to test how far I could go without a flight, which ends up becoming the main expense for a traveller,” he explained. “So, I went from India to Bangladesh, Myanmar, Azerbaijan, Mongolia, South Africa, Kazakhstan and even Russia only via land.”

Last year, the onset of the pandemic put a spoke in his wheels, leaving the vagabond stranded in Azerbaijan for several months to wait out a surge in infections. COVID-19 restrictions also prevented Yadav from getting a visa from Iraq, a country he has dreamed of visiting since he was a kid.

Even so, the rest of his journey was packed with exhilarating tales like inadvertently trying local drugs, sampling delicacies, and dealing with law enforcement.

“In Ethiopia, I met a local girl who offered me some leaves,” he narrated. “It was only after I ate them that I realised it was a local drug called Khat, which is legal and commonly consumed across South Africa, the same way bhang is in India. People eat it along with their breakfast here and it makes your lips numb for hours and makes you feel light-headed.”

Yadav pointed out how language barriers often made for interesting situations since key details regularly get lost in translation.

“It’s impossible to learn all the languages, so I usually rely on Google Translate. When I was on a train in Mongolia, I was trying to ask a train conductor to get me a spoon, which is called ‘chammach’ in Hindi. Instead, the app heard ‘chumma’, which means to kiss. It got awkward.”

He also had a similar experience in Tanzania, when he took a bite of something he assumed was a potato chip before realising it was a local delicacy made from the bones of birds.

“When it comes to food, I often imitate the sounds of the animals to ask what meat we are eating,” he added. “I also go on dates where I only speak to women using Google Translate.”

Life on the road, or at least on the side of it, comes with its share of incredulous stories. But it can quite quickly also become dangerous.

“I was in Oymyakon, Russia, the coldest inhabited region in the world, and the temperature was minus 60 degrees Celsius. I was lucky enough to find a truck driver who gave me a lift, but just as we were going down this frozen road that was as slippery as glass, the truck got a flat [tyre]. We nearly got frostbite trying to change the tyre.”

Though he has never been robbed or beaten up while on the road, Yadav acknowledged that this was largely due to his privilege as a man. “I usually travel at night instead of the day, which is something other women solo travellers I’ve met aren’t comfortable with. I’ve experienced being touched inappropriately in Thailand, which made me feel very uncomfortable and unsafe. But, it’s still a lot safer out there for me as a man than it would be for a woman, which is sad.”

Yadav also pointed out that since the concept of hitchhiking is still relatively foreign in many countries, locals often assume he is offering them something when he holds a sign asking for a lift. Others grow concerned about his agenda and, sometimes, report him to the police.

“I think I must have gone to at least 10 different police stations for being ‘suspicious,’ especially in China,” he said. “I was also detained by the army in Afghanistan a month before the Taliban took over. They thought I was a spy and detained me for eight hours, then asked me to leave the country.”

But despite the potential dangers involved, Yadav believes that every experience can evolve into a valuable lesson, while some strangers, even the hostile ones, can evolve into friends. “In China, a policeman was kind enough to give me a lift and even take me home to meet his family. I think when you travel like this, you realise how much more similar we are than different. Hitchhiking teaches you that it’s never too late to see the world, no matter where you come from or how much money you have.”