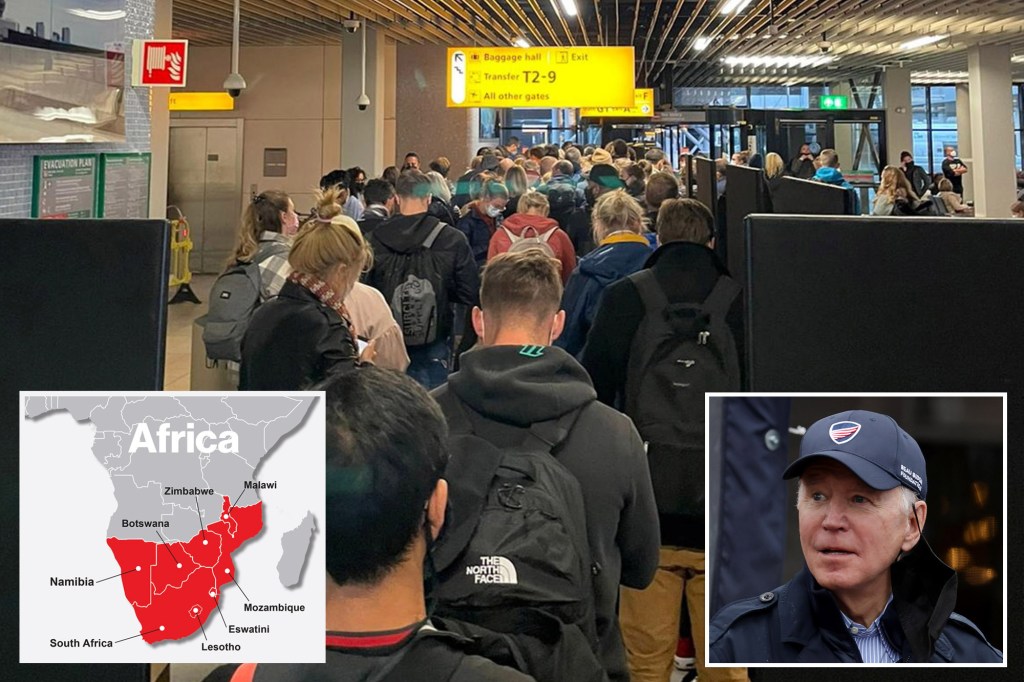 President Biden said Friday that he delayed implementation of a new ban on travel from southern Africa on the advice of his medical advisers, who are led by Dr. Anthony Fauci.

A reporter asked Biden why the emergency precaution will take effect Monday, rather than immediately to contain the potentially more contagious Omicron version of COVID-19.

“Why not do it now like other countries have done?” the journalist asked Biden, who is spending a long Thanksgiving weekend in Nantucket.

Biden said “because that was the recommendation coming from my medical team.” Fauci is Biden’s chief medical adviser and led a half hour briefing for Biden on Friday.

Biden said “we don’t know a lot about the variant except that it is of great concern and it seems to spread rapidly — and I spent about a half hour this morning with my COVID team led by Dr. Fauci and that was the decision we made.”

But Biden seemed to have a poor grasp on the travel rules. He misstated the number of countries impacted and said the policy would bar people traveling “to and from” the region, despite official releases only noting restrictions on travel from — but not to — southern Africa.

“I’ve decided that we’re going to be cautious and make sure there is no travel to and from South Africa and six other countries in that region, except for American citizens who are able to come back,” Biden said.

Biden also attempted to reassure spooked financial markets. He called a steep drop in stock values during the holiday weekend-shortened session “expected” because of prior drops after poor pandemic news and said he was “not at all” worried.

Just hours before the new travel ban was announced, Fauci, the longtime director of the National Institute of Allergy and Infectious Diseases, gave the impression he wasn’t recommending such bans and cited a need for more data.

“There is always the possibility of doing what the UK has done, namely block travel from South Africa and related countries,” Fauci said in a CNN interview.

“That’s certainly something you think about and get prepared to do. You’re prepared to do everything you need to protect the American public. But you want to make sure there’s a basis for doing that.”

Fauci added in that interview: “Obviously as soon as we find out more information we’ll make a decision as quickly as we possibly can.”

While taking questions from reporters after the ban was announced, Biden knocked a reporter’s question about whether the new travel restriction could incentivize countries to hide new COVID-19 variants.

“That’s ridiculous because you can’t hide the variants. It’s not like someone could hide the fact that there’s a new variant and people getting sick,” Biden said.

So far, the Omicron variant has been detected in Botswana, South Africa, Hong Kong, Belgium and Israel. The infected person in Belgium had traveled recently to Egypt and Turkey and the Israeli patient recently visited Malawi.

Although the new variant might be more contagious and vaccine-resistant due to a high number of mutations, Biden urged people to continue to get vaccinated.

“Here’s the deal: Every American who has not been vaccinated should be responsible and be vaccinated from age five years and up… Everyone eligible for booster shots should get the booster shot immediately upon being eligible. That is a minimum that everyone should be doing,” he said.

Biden added: “You know, we always talk about whether this is about freedom. I think it’s a patriotic responsibility.”

Biden sought to mandate vaccination or weekly testing upon employers with 100 or more workers, but that rule is tied up in court. Asked if he was considering “any new mandates,” Biden said, “No, not at the moment.”

The Biden administration this month ended a long-running ban on travel from early COVID-19 hotspots including Europe and adopted a policy where foreign citizens who enter the US by plane must be vaccinated and also get tested for the virus within three days.

But rapid tests of dubious accuracy are allowed and residents of poorer countries, many of them in Africa, were exempted from the vaccine requirement.

Biden kept the Europe travel ban long after former President Donald Trump wanted it to expire, but as a presidential candidate he took shots at Trump for banning residents of coronavirus hotspots.

“A wall will not stop the coronavirus. Banning all travel from Europe — or any other part of the world — will not stop it,” Biden tweeted one day after Trump announced the Europe travel ban with just over 48 hours notice to travelers. “This disease could impact every nation and any person on the planet — and we need a plan to combat it.”