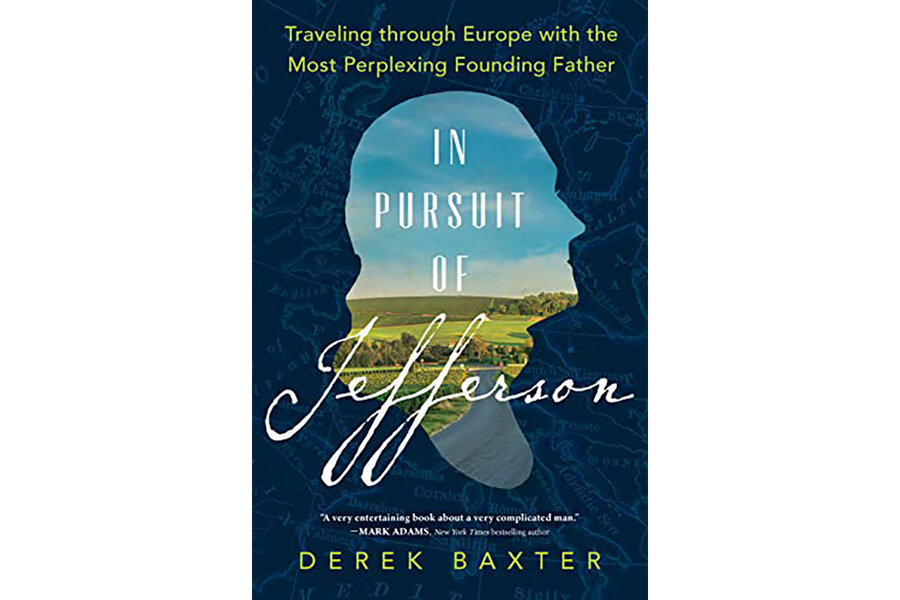 Derek Baxter says that Thomas Jefferson has long been his hero, and he has the proof: He began visiting the Founding Father’s home, Monticello, as a child; starred as Jefferson in a fourth-grade play; took his prom date to the Jefferson Memorial; and majored in history at the Jefferson-founded University of Virginia.

So it makes sense that when Baxter was in the throes of a midlife crisis – dissatisfied with his predictable job as an attorney for a government agency, exhausted by the demands of parenting two young children – he looked to his idol for direction. His discovery of “Hints to Americans Traveling in Europe,” an obscure, unpublished travel guide Jefferson wrote in 1788 for two young men planning their grand tour of the Continent, captured his imagination. In his debut book, “In Pursuit of Jefferson: Traveling Through Europe With the Most Perplexing Founding Father,” Baxter winningly details his experiences following Jefferson’s itinerary while also grappling with his complicated legacy.

Jefferson’s “Hints” starts in Amsterdam and ends in Paris, with stops in Germany, Switzerland, and Italy. Because Baxter isn’t in financial shape for a grand tour himself, he plans shorter trips over a period of several years, accompanied at various points by his exceedingly supportive wife, his children, and his parents, all of whom come to life through his warm and witty anecdotes.

Baxter describes the guide Jefferson wrote for his young protégés as “a sober travel regime with themes to explore and questions to answer, designed to keep them on the straight and narrow.” Jefferson asked them to focus on eight “Objects of Attention for an American,” and Baxter, naturally, does the same. Among these are agriculture, manufacturing, architecture, landscape gardening, and government policies.

The author’s admiration for Jefferson had always been dampened by the fact that he was a slaveholder. Baxter, who is white, is relieved, then, to sidestep the issue of slavery while following Jefferson’s travels in Europe, which he reasons is a world away from the Virginia plantation where enslaved men and women cultivated Jefferson’s tobacco fields. While he avoids it for a time, however, Baxter slowly comes to realize that practically everything Jefferson did was tied up with slavery.

Take architecture: With Jefferson, a self-taught architect, as their guide, Baxter and his family visit the ancient Roman amphitheaters and temples of Provence, France. They learn that Jefferson favored classical and neoclassical designs over ornate Gothic and Rococo structures. “He believed that buildings should express a nation’s core values,” Baxter notes. Jefferson intended Monticello, the Virginia State Capitol, and the University of Virginia – all of which he designed – to evoke Roman architecture, with simple white-columned buildings reflecting pure and honest republican virtues.

Back home in Virginia, however, Baxter learns that the architectural plans Jefferson drew up for the University of Virginia pointedly omitted the cottage that housed enslaved laborers. The author begins to learn more about the enslaved men and women who not only built Jefferson’s structures but kept them running. While the Founder opposed the institution of slavery in theory, he consistently relied on and benefited from it, in contradiction to the “core values” he wished his buildings to express.

“In Pursuit of Jefferson” packs a lot in – the book blends travel writing, memoir, and American and French history with mini lessons on topics ranging from wine and horticulture to the 2018 political protests in France. While the structure is at times hard to get a handle on, the earnest Baxter will likely win readers over.

Get stories that
empower and uplift daily.

“The more I’m able to learn about the enslaved people essential to Jefferson’s projects … the more uncomfortable I feel on this journey – which I’d intended, perhaps naively, to be a joyous, uplifting one, filled with personal growth,” the author reflects. Disillusioned in his hero, he jettisons the project for a time. We’re fortunate that he picked it back up, working toward an understanding of Jefferson’s profound failures along with his towering achievements.

Baxter delivers on the personal growth, too. As travel and research expands his perspective, his outlook on his own history and privilege changes. He spent his early years in a trailer in Arkansas and thought of his family as “self-made” for rising to the middle class. He rethinks that assessment as he considers, for instance, that Black men would have been barred from the union jobs his grandfathers held in the Jim Crow South. “Only now … do I see how my family benefited from a thumb on the scale,” he writes. The progression of his thinking is moving and sincere – and relevant. At a time when cultural battles over everything from monuments to school curricula often turn ugly, Baxter provides a hopeful model for an honest reckoning with history.